Dear girls of the world: Start saying yes and stop closing the doors behind you

Wait just one second before you close that door behind you. In the proverbial game show that is Life, you may never know what’s behind Door Number 2. Or Doors 1 and 3, for that matter. But I’m telling you, don’t keep one door closed just because you’re afraid of what may behind it.

As I closed up my rolling suitcase with built-in backpack straps on September 12th, 2007 and shut my passport cover after staring at the Spanish visa on page 8 one last time, I had to steady myself. I remember inhaling through my nose, opening my eyes and took wobbly steps down the stairs to my mom’s car.

I thought I’d closed the door on a steady career in radio, that I’d be shutting family out of a big adventure while teaching English in Spain for a year. I felt that by throwing open one door, all of the others would close, and that I’d be trapped in a maze with no way out.

I won’t lie – my first few weeks living solo in a country whose language was not my own felt like that labyrinth. I was miserable, friendless and unable to communicate properly in the heavily accented andalú in Seville. Facebook and Skype were easy enemies as I watched my newly graduated friends launch careers, date in the city and start families.

With my family in Budapest, Hungary (December 2013)

After I barked at my mom over the phone one sullen Sunday evening as October showers pounded down outside, she gave me three words of advice: Start saying yes.

I asked her what she meant, and she said that opportunity would come knocking, and I should be ready to throw open the door, and to keep it open. Even after eight years in Spain and a lifetime of being particularly non-linear, I continue to heed to that advice.

So, fellow Girls of the World, I’m encouraging you to start saying yes and to stop closing the doors behind you.

Don’t close the door on a career

Teaching high schoolers at my first job (May 2010)

I swore up and down that I’d never be a teacher. I’d watch my mother tear her hair out every Sunday night from mid August until June as she graded reports, wrote lesson plans and made her lunch for the next day. I was determined to be anything but an educator.

After studying abroad in Spain, I resolved to take a year off to live in Europe and learn a new language. A friend told me about a government-sponsored teaching program in Spain with no fees, and my tuned changed. I didn’t want to close a door on teaching abroad – in Spain or anywhere else – simply because I didn’t think it was the right career choice.

Eight years into my career as a teacher, I’ve been a language assistant, written bilingual curriculum for preschoolers, designed a summer camp and subbed in as a drama teacher. I’m currently the director of studies at a small language school where my boss encourages me to pursue other interests outside of class. In my spare time, I run a consulting business, blog around the web and even record children’s books in English. Because I didn’t close the door on my other talents and curiosities, no two work days are the same – and that’s precisely the reason I got a journalism degree.

I’ve long since given up imagining what I could be doing for work had I not chosen to teach. Deciding to walk through the teacher door has led me to a career that can take me around the world if I want it to.

Don’t close the door on travel

During my first year in Spain, the running joke in the teacher’s room was where I’d be headed on the next long weekend. I was hellbent on running my bank balance to zero as I traipsed around Spain, Europe and Northern Africa (I nearly succeeded – I returned home with less than $300 in my savings account after nine months away).

As a shy child who’d never really pushed out of her comfort zone, I was apprehensive to stay in hostels and be alone for long periods of time, but moving to Spain alone changed all of that.

Travel became a lifestyle for me, and I garnered passport stamps and travel hacks, not to mention airline miles and adventures. My phone calls home went from angered to overly excited as I booked plane tickets and postponed Skype meetings. Being based out of Spain has made travel a priority for me, and even with a mortgage, I set aside each month for trips and take advantage of my three-day weekends to explore.

At first, travel was a way to clear my head and make sense of Spain. I used it as time to devour books, to improve my travel photography skills and to look for stories for my inevitable return to the US to work in journalism.

But now, travel is a treat I like to give myself, particularly when traveling alone. It helps me push my own limits, from walking the Camino de Santiago to spending 10 days in India as a woman. I feel braver, more sure of myself and acutely aware of what’s going on around me. And as a neurotic woman with an anxious side, travel mishaps have helped me hone my critical thinking and adaptability skills – especially when my plane made an emergency weather landing in Romania when en route back to Spain. On New Year’s Eve. At an airport that had been closed earlier in the day for the holiday.

Girl, don’t even think about closing the door on travel, even if it’s just an hour away or to a familiar destination.

Don’t close the door on relationships

When Enrique showed up at my house wielding a half-drunk bottle of Ballantine’s and heavily accented English, I was ready to tell him he had the wrong apartment and shut the door on him.  As we shared a whiskey-laced kiss a few hours later, I was determined to ignore any text messages that came from him – I wasn’t interested in dating abroad and was still not over the guy from college who had led me on.

At the coaxing of the friend who introduced us, I shyly accepted a dinner date and the peace offering of a jar or peanut butter he’d brought me from a business trip to the US. I figured there was no need to shut out a friend abroad, and much less one who corrected my Spanish and showed me hidden tapas restaurants in my neighborhood.

Eight years later, we married in my childhood church in a bilingual ceremony.

Accompanying me down the aisle that day were my younger sister and my two best friends from high school. Despite straddling two cultures and two continents, I feel just as close to the important people in my life because maintaining contact has been extremely important to me. My loved ones aren’t ‘out of sight, out of mind’ – and thanks to whatsapp and Snapchat, they’re usually all over my phone notifications.

I was concerned that moving to Spain would mean losing all of those close to me, that it would leave me floating without the comforts of home and of old friends. I worked tirelessly to write emails and update my blog so that they could be a part of my experience, even if they were thousands of miles away.

So many of my friends were able to make it for my wedding, coming as far away as Maine, Texas and even Spain. I’m thankful to have found and kept such wonderful relationships, refusing to ever shut a door on someone I love. And many of them have come to visit, allowing me to revisit my city with different eyes (and probably too many glasses of wine).

Don’t close the door on yourself

Most importantly, girls: don’t you dare shut the door on yourself. Most of you are probably like me: teetering on 30, blindly unaware of what’s to come next. During these weird and exhilarating times, stay true to yourself: your passions, your needs, your down time, your guilty pleasures.

I’ve found that moving abroad and deciding to stay helped me through my 20s. I nearly didn’t walk through my front door and onto a plane, but I’m ultimately glad I took a deep breath and did.

I’ve recently walked through the “4th Decade” door, territory that seemed foreign and, admittedly, a little bit scary. But knowing I’ve been able to live a sort of double life meant that my 30th birthday passed with little fanfare – just a lot of expectations and goals. By opening the door to living abroad, starting a career and remembering to love myself, I’m satisfied with the life I’ve cultivated in these 30 years.

As far as I know, you’re not clairvoyant, so throw open all the doors and leave them open – the fun part of life is the unpredictable.

Saludos y un besito,
Cat
who is living the life in Spain

Inspired by Cat’s story? Hover on the image below to pin on Pinterest! 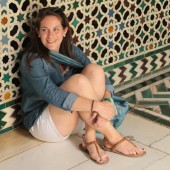 Cat Gaa left the skyscrapers of Chicago for the olive groves in Southern Spain. Eight years, three jobs and a husband later, she blogs about expat life in Seville at sunshineandsiestas.com while teaching English, running a consulting business and instagramming Spain, food and travel at @sunshinesiestas.